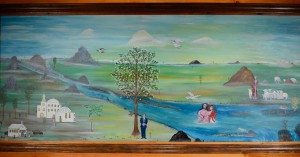 Mary Ann DeMuth reports that a 1977 painting by Georgia’s acclaimed folk artist Howard Finster, believed to be his largest, will be auctioned virtually on Saturday, Nov. 14. Online bids for the painting, which is presented by the Buford-based Slotin Folk Art Auction, will begin at 10 am. Entitled “Chelsea Baptist Church,” Finster’s painting measures 103.5 in. wide by 44 in. tall.

Kelly Yamanouchi reports, nearly three years after a massive blackout at Hartsfield-Jackson International disrupted travel plans around the world, Georgia Power has agreed to add, at no cost to the city of Atlanta, generators that will provide back-up power. The 11-hour power outage at the world’s busiest airport in December 2017 became national news after it affected tens of thousands of travelers.

Trevor Williams reports that Atlanta-based AGCO Corp.‘s foundation is partnering with a British charity to train poultry farmers in Zambia, aiming to boost production in a country where it has preached the promise of mechanization for years.

Merritt Melancon reports that Georgians have long viewed higher education as the fastest path to a brighter future, but new research shows how college graduates also fuel the state’s economic engine. The lifetime earnings of each new four-year college graduate will increase Georgia’s gross domestic product by almost $2 million, according to a new study from the Selig Center for Economic Growth at the University of Georgia.

Damon Cline reports, community leaders say a $10 million gift from Augusta National Golf Club and its corporate partners announced Wednesday will provide a much needed boost to two urban neighborhoods in need of revitalization. Augusta National’s $2.5 million gift, matched by AT&T, Bank of America and IBM, will help build a nonprofit community center known as “The Hub,” as well as a new headquarters for the Boys & Girls Clubs of Augusta, on part of a 35-acre tract owned by the Medical College of Georgia Foundation.

Business Casual: What if?

Susan Percy writes, suppose, when the dust settles and all the votes are counted, we wake up one nice, cool early-November morning to find that the contentious election season of 2020 is finally behind us, and we have a result that makes us proud? Suppose the winner ushers in a new era of compassion, unity and purpose?

Dave Williams reports that the University System of Georgia reported record enrollment for the fall semester Wednesday despite the coronavirus pandemic. The fall enrollment of 341,485 students was up 2.4% over the fall 2019 semester, marking the seventh year in a row of growth in the system.

Tanasia Kenney reports that Georgia will conduct a “full, by-hand” statewide recount of every ballot cast during the presidential race between President Donald Trump and President-elect Joe Biden, Secretary of State Brad Raffensperger announced Wednesday. The news comes as Biden maintains a slight lead over the president in the Peach State, and as Raffensperger faces unsubstantiated claims of election fraud and mismanagement from fellow Republicans.

Robin Kemp reports that Rep. Debra Bazemore (D-63, South Fulton) has been elected House Minority Chief Deputy Whip by the Georgia House Democratic Caucus. Bazemore was tapped Nov. 10 and will be responsible for keeping track of bills and resolutions as they progress through both the House and Senate, as well as explaining the finer points of pending legislation to members of the Minority Caucus.

Ross Williams reports, while county election workers were still counting the votes in Georgia, the Republican State Leadership Committee declared victory in the state. That political action committee’s goal is to elect Republicans to state offices and protect their seats. In Georgia, it spent nearly $3 million to defend Republican seats.

Greg Bluestein reports that the race for Georgia’s U.S. Senate runoffs is starting exactly how the presidential contest ended, with an intense and relentless push to motivate each party’s core supporters rather than preach to the undecided. U.S. Sens. Kelly Loeffler and David Perdue aim to rally conservatives and appease President Donald Trump by taking the stunning step of calling for a fellow Republican elections official to resign and echoing claims without any evidence that fraud marred the vote.