While the coronavirus pandemic has contributed to significantly reduced airport revenues, it apparently has been a boon for customer satisfaction according to the J.D. Power 2020 North America Airport Satisfaction Study. Low passenger volumes and relatively empty airports have contributed to shorter queues at security checkpoints, faster baggage retrieval and less crowded food and retail services. All that adds up to happier travelers.

The new study, conducted from August 2019 to July 2020, surveyed more than 26,000 U.S. and Canadian residents who traveled through at least one airport. Participants were asked to rate terminal facilities; arrival and departure; baggage claim; security checkpoints; baggage check-in; and food, beverage and retail. 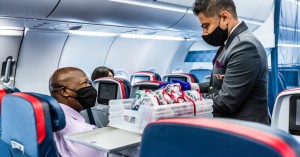 The study found that nearly a third of travelers thought the airport they went through had improved after seeing its response to COVID-19. Hartsfield-Jackson’s pandemic response has been extensive, as has that of Delta Air Lines, its largest airline partner. Learn more about these ongoing safety measures and the airport’s continuing projects aimed at improving customer service in this month’s feature, “Tempting Travelers to Take Flight.”

The sky's the limit

Georgia colleges and universities rank among the best