Retail, shipping companies hiring thousands around Georgia ahead of the holiday season

Joe Henke reports that Amazon, UPS, DHL, FedEx, Home Depot, and Walmart are some of the retail and shipping companies currently hiring thousands of people for seasonal and permanent positions around Atlanta and Georgia. Each is hiring as Georgia’s unemployment rate is rebounding from a high of 12.6 percent in April after pandemic related layoffs and business closures took place. 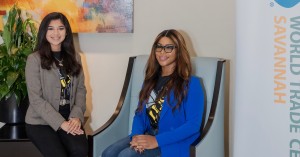 Delta to turn down CARES Act loan, take on debt backed by SkyMile

Kelly Yamanouchi reports that Delta Air Lines will turn down a federal loan through the CARES Act and instead take on debt backed by its SkyMiles frequent flier program. The move allows Atlanta-based Delta to avoid surrendering more control in return for new federal money.

Curt Yeomans reports that international water technology company Siemens is joining Gwinnett County’s The Water Tower center for water innovation, research and development and training in Buford. The Water Tower is being built next to the F. Wayne Hill Water Resources Center near the Gwinnett Environmental and Heritage Center in Buford, and county officials are heralding the addition of Siemens, who they called a “technology powerhouse in the water sector” to the group of founding partners for the research center.

Final spaceport decision due in March

Gordon Jackson reports that the public has spoken for the last time on the Federal Aviation Administration’s pending decision on a license to operate a spaceport in Camden County. A final decision on the request from Camden County commissioners for a license to establish a spaceport will be announced in March without an additional public comment period, according to an announcement by the FAA.

Andy Miller reports that a health care staffing company with strong political connections has been paid more than $40 million by the state of Georgia to supply medical workers to fight COVID-19. Jackson Healthcare, a private company based in Alpharetta, was asked by state officials for help in March.

Trump’s campaign pivots to economy with TV barrage in Georgia

Greg Bluestein reports that President Donald Trump’s campaign unleashed a new round of ads in Georgia and other competitive states on Tuesday that aim to shift the focus of his re-election bid from law-and-order issues to the economy. The Georgia ad, “For You,” warns that a Joe Biden administration would mean higher taxes and lead to an “economy in ruins.”