Trade Record: Last year, Georgia set a record for exports and global trade, with $41.2 billion in exports and $143.3 billion in overall international trade.

Duluth Auto: Charlotte, N.C.-based Sonic Automotive, one of the largest car retailers in the U.S., is locating its regional headquarters and a dealership in Duluth. The $20-million project will create 130 new jobs.

Whitfield Co. Flooring: Novalis Innovative Flooring is building its first U.S. production facility in Whitfield County. The $30-million building will be located adjacent to its new North American headquarters and innovation center in Dalton and will create 120 jobs.

Norcross Treats: Lucky Premium Treats LLC will open a processing plant near Norcross. The 22,628-square-foot facility will process poultry and other meats for premium, all-natural dog treats. The company is moving from a smaller facility in Doraville due to growing demand.

Spring Hires: The Home Depot is hiring 80,000 people nationwide – 2,250 of those in Georgia – as part of its yearly ramp-up to spring, its busiest season.

This article appears in the April 2020 issue of Georgia Trend.
Categories: Economic Development Around The State, Up Front
Tags: Christy Simo

On a Mission: Q&A with Vanessa Harrison, AT&T Georgia president 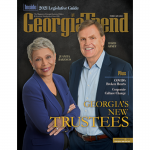 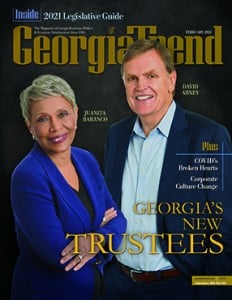