Wes Wolfe reports that more than four years of litigation and untold thousands of dollars in legal fees later, the state of Georgia’s lawsuit against the federal government regarding the 2015 Waters of the United States rule is now moot. U.S. District Judge Lisa Godbey Wood submitted the order Friday denying motions by the states and national business groups that she vacate the rule. 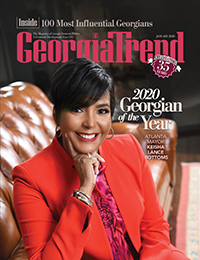 Staff reports on the individuals included in Georgia Trend’s 22nd annual listing of the 100 Most Influential Georgians. It’s a remarkable assemblage of people who prepare, work hard and have contributed to making life better for Georgians.

Joshua Sharpe reports that Experian has agreed to settle with 56,000 Americans who had their credit reports tainted by data from a beleaguered online payday lender. The $24 million settlement comes in response to a federal class-action suit filed in 2016 by a Gwinnett County woman who, like the others, saw her credit report suffer because of a delinquency from Western Sky Financial.

David Allison reports that a six-year concession dispute at the Atlanta airport, which was reportedly settled in December, apparently won’t be fully resolved until 2020. On Dec. 5, XpresSpa Group Inc. (Nasdaq: XSPA), Cordial Endeavor Concessions of Atlanta LLC and the city of Atlanta together announced they had reached an agreement to bring to a close six years of mediation, Federal Aviation Administration proceedings and litigation in a dispute over stores at Hartsfield-Jackson Atlanta International Airport.

Staff reports that Governor Brian P. Kemp announced Friday that Lidl US, a leading grocery retailer, will build a regional distribution center in Covington, Georgia. Lidl is investing $100 million in the project which will create 270 new full-time jobs.

Andy Miller reports that Piedmont Healthcare and its 11 hospitals are leaving the Georgia Hospital Association, a major blow to the finances and prestige of the health industry group. Industry officials told Georgia Health News on Friday that the nonprofit Piedmont system, which is based in Atlanta, isn’t happy about the GHA leadership’s lack of support among key lawmakers and the Governor’s Office.

Dave Williams reports that Gov. Brian Kemp infused the University System of Georgia Board of Regents Friday with some new blood. Kemp named five new members to the board that oversees the 26 institutions that make up the university system, including two who will serve at large and three who will represent the state’s 10th, 12th and 14th congressional districts.

Katie Nussbaum reports that more than a decade has passed since a fire destroyed one of Savannah’s iconic restaurants, Williams Seafood. The property will finally see new life in 2020 as the site of a new marina. Construction begins later this month on the Savannah Boathouse.

Mary Ann DeMuth reports that ccording to Andrew Greenberg, executive director of the Georgia Game Developers Association, the video game industry here generates $830 million in economic impact on the state. More than 160 companies are now developing games and employing programmers, designers, artists and musicians in the Peach State. And, Atlanta is ranked among the best cities for gamers.

K. T. McKee reports that legislation many Georgia municipalities feel would erode local control of residential building design standards may be on the move again. It’s an issue Rome leaders and city commissioners said is worth keeping an eye on again as they gathered with local legislators at their annual end-of-the-year “Hometown Connection” meeting. The city commission passed a resolution last February that helped stall House Bill 302.

Wild Hog Supper an appetizer before legislative calendar fills up

Jill Nolin reports that the smell of barbecue will soon waft from the Georgia Freight Depot in downtown Atlanta. For Georgia politicos, that means one thing: Lawmakers are about to return to the halls of the Gold Dome. For nearly six decades, the Wild Hog Supper has signified the official kickoff of the new legislative session.

Jessica Szilagyi reports that a bill pre-filed in the Georgia Senate would make add Election Day to the state holiday calendar. State Senator Tonya Anderson filed Senate Bill 283 last month during the pre-filing period ahead of the legislative session. Anderson, a Lithonia Democrat elected to the Senate in 2017, represents the 43rd state senate district.

Nyamekye Daniel reports that the Georgia House Juvenile Justice Committee held a special meeting Friday to consider raising the age at which a child can be tried as an adult. It’s been a prolonged effort by some legislators to change the state’s law to follow most of the country.

The Jolt: David Perdue opts out of call to repeal Roe v. Wade

Jim Galloway, Greg Bluestein and Tia Mitchell report that on Thursday, Bloomberg reporter Steven Dennis noted on Twitter that 39 Republican members of the U.S. Senate had signed an amicus brief calling on the U.S. Supreme Court to overturn Roe v. Wade, the 1973 case that established a constitutional right to an abortion.