No Mercy: After The Hospital Closes, How Do People Get Emergency Care?

Sarah Jane Tribble reports, for more than 30 minutes on a frigid February morning, Robert Findley lay unconscious in the back of an ambulance as paramedics hand-pumped oxygen into his lungs. They were waiting for a helicopter to land at a helipad just across the icy parking lot next to Mercy Hospital Fort Scott, which closed in December. 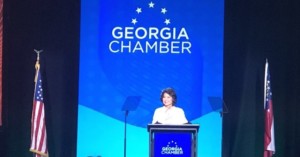 Nedra Rhone reports that Dasani, one of the top branded bottled waters in the U.S., is getting a new look. Atlanta-based Coca-Cola Company announced this week it will launch Dasani in aluminum cans and bottles this fall in the Northeast expanding to other regions in 2020. The company will also introduce a bottle made of 50% recycled plastic to reduce the amount of new plastic used in packaging.

Amy Wenk reports that the developer of downtown’s Gulch project has filed plans for the next phase, including hundreds of hotel rooms and residential units. Los Angeles developer CIM Group is working with state planners through the Development of Regional Impact program, underscoring the size of the 6-acre project.

David Pendered reports that Metro Atlanta’s relentless growth results in part from the ability to process sewage. Fulton County is poised to foster growth in Roswell, Alpharetta and other areas north of Sandy Springs with construction set to start this fall on the expansion of the Big Creek Water Reclamation Facility. In addition to serving these development destinations, the Big Creek sewage plant serves portions of Cobb and Forsyth counties.

Mary Ann DeMuth reports that for families with small tots, diapers are a necessity but they’re not cheap. Babies can sometimes need up to 12 diapers a day at a cost that can exceed $100 a month. One in three families struggles to pay for their diapers and some must choose between diapers and food. To address the problem, Sheltering Arms, Georgia’s largest nonprofit early education provider, has put out the call for diaper donations to help the state’s most vulnerable families.

Doug Walker reports, when local construction company executives flip the calendar to Jan. 1, they will have a whole new set of codes that govern construction to deal with. Georgia will officially start to enforce the 2018 International Building Code, the International Residential Code dealing with plumbing and mechanical codes, but the adoption of the 2015 International Energy Code may be generating as much interest among commercial builders as anything else.

Isabel Hughes reports that standing in a room filled with city and county officials, business executives and other community leaders at the 1818 Club, U.S. Attorney BJay Pak smiles as Gwinnett County Chamber of Commerce members approach him, hands outstretched. Though Pak knows a number of those attending the Chamber’s On Topic luncheon, even to those he doesn’t know, the chief federal prosecutor for the Northern District of Georgia is warm and friendly, an approachable figure.

Robin McDonald reports that a federal judge in Atlanta has issued an injunction barring Georgia from using its obsolete voting system after 2019 in an order reflecting her alarm about election security heading into the 2020 presidential race. In a 153-page order, Judge Amy Totenberg of the U.S. District Court for the Northern District of Georgia agreed on Thursday to allow the state to use the 18-year-old electronic voting machines, which still operate on software that expired more than five years ago and have no paper trail, one last time in statewide municipal and county elections scheduled for November.

Taylor Denman reports that former Democratic Georgia gubernatorial candidate Stacey Abrams said championing voters’ rights leading up to 2020 elections wouldn’t prohibit her from accepting an invitation for a higher office, if the situation presented itself to her. “I would certainly welcome an invitation to stand with our democratic nominee (for president) for vice president of the United States,” Abrams said.

Tamar Hallerman reports that three years ago, Atlanta’s northern suburbs were considered comfortable ground for the GOP. But President’s Donald Trump’s election prompted a seismic political shift, particularly among the educated women who help form the core of the Cobb, Fulton and DeKalb-based 6th District.