Emma Hurt reports that Trump administration’s new trade agreement with Mexico and Canada could mean major losses for Georgia’s produce industry, according to a new study from the University of Georgia. The new trade agreement reached last fall with Mexico and Canada, known as the United States-Mexico-Canada Agreement or USMCA, was an effort to improve on NAFTA, but per the study, it could be just as bad as NAFTA for Georgia’s produce industry. In fact, the study predicts, it could cost the state 8,000 jobs and $1 billion in economic output. 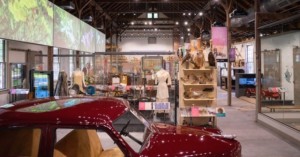 Mary Ann Demuth reports, along with its pristine beaches and fun outdoor activities, Jekyll Island now has a new attraction. Mosaic, the Jekyll Island Museum, opened last month, beckoning visitors to take a historical adventure through thousands of years of the island’s history. Beginning with the Native American era and continuing to post-World War II, Mosaic’s displays and artifacts tell compelling stories and allow visitors to get an up-close view of everything from a Native American dugout canoe made from Jekyll pine to a restored 1947 Studebaker.

Michael E. Kanell and Arielle Kass report that about 4% of metro Atlanta’s workforce has a temporary job through a staffing agency. That’s twice the national average. Fulton and Cobb rank in the top 10 among U.S. counties, according to government data crunched by Emsi, a labor market analytics firm.

Trevor Williams reports that when Canada opened its first-ever U.S. office for the country’s export credit agency in Atlanta last week, it was making a multilayered statement on its trade philosophy. The message? The country is both bullish on the U.S. South and committed to the idea that Canadian and American firms (and their economies) work better when they work together.

James Swift reports that the Development Authority of Bartow County approved a memorandum of understanding (MOU) with Shaw Industries Group, Inc. at a meeting Thursday morning, which could possibly lead to the Authority issuing up to $20 million in additional bonds to facilitate the expansion of Shaw’s Plant T1 in Adairsville. “The original project was 500 jobs,” said CBCDOED Executive Director Melinda Lemmon.

Staff reports that the Anschutz Foundation has awarded the Georgia Historical Society $200,000 toward the Society’s Next Century Initiative. The gift is a response to a challenge grant from the National Endowment for the Humanities to help complete the capital campaign for renovation and expansion of the GHS Research Center in Savannah.

Clint Thompson reports that Frank McGill, 92, affectionally known throughout the Georgia agricultural community as “Mr. Peanut,” received the University of Georgia College of Agricultural and Environmental Sciences’ Medallion of Honor during a private event on Thursday, May 2, on the UGA Tifton campus. “Once in a generation, someone comes along who forever changes a segment of agriculture. When it comes to peanuts, Frank McGill is that person,” said CAES Dean Sam Pardue, who presented McGill with the award.

Tom Corwin reports, in order to get more doctors to rural underserved areas of Georgia, the Medical College of Georgia is looking to shorten their time in school, get them into primary care and offer tuition forgiveness if they practice at least six years in one of those areas. To Augusta University President Brooks Keel, it is a “very bold” initiative that will transform the school’s medical education and serve the state better.

Greg Bluestein reports that Democrat Pete Buttigieg became the latest White House hopeful to visit former President Jimmy Carter in his hometown of Plains with a swing through southwest Georgia over the weekend. The mayor of South Bend, Ind. joined a large crowd at Carter’s Sunday school class at Maranatha Baptist Church, and his campaign said he later lunched with Carter and his wife, Rosalynn, to chat about topics ranging from faith to politicking.