Matt Weeks reports that every racial and ethnic minority group in America is making financial gains, but not at equal rates, according to the latest Multicultural Economy Report from the University of Georgia. The annual report calculates the consumer buying power, or total income after taxes, for minority markets in the U.S. — African Americans, Asian Americans, Hispanics and Native Americans. 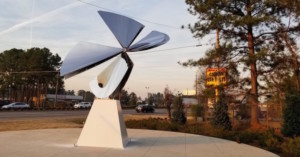 Mary Ann DeMuth reports that the interchange at Atlanta’s Fulton Industrial Boulevard and Interstate 20 has recently undergone a makeover that includes upgraded landscaping, pedestrian crosswalks, new streetlights, repairs to sidewalks and curbs, and now, a signature sculpture. Titled Stella Nova, or New Star, the sculpture welcomes people to the commercial district and celebrates the completion of the $1.8-million interchange improvement project by the Boulevard Community Improvement District (CID).

Atlanta job numbers expected to be up, echoing U.S. report

Michael E. Kanell reports that if metro Atlanta’s economy parallels the nation’s, then hiring was up last month, albeit at a slower pace than the same time last year. Friday’s report on U.S. job growth showed the nation added 196,000 positions during March, the government said, while the unemployment rate held steady at 3.8 percent.

Janet Jones Kendall reports that the deepening of the Savannah Harbor is expected to cost close to $1 billion, but but it won’t take long to see a return on the investment. The nation’s economy will save $282 million per year in transportation costs thanks to the project, according to a study by the U.S. Army Corps of Engineers, and that’s just part of the improvements and additions that are coming to facilities of the Georgia Ports Authority.

Josephine Bennett reports that a shuttered Boeing facility in Macon is getting new life thanks to a unique partnership between local, state and federal government. In 2016, Macon’s Boeing plant closed after being opened 35 years. Since then, the city has been looking for a new tenant.

David Pendered reports that a pending renewal and expansion on the runway of Gwinnett County’s airport evidently is the type of job that some state lawmakers had in mind when they talked about greater state involvement in local airports. Gwinnett’s airport also highlights the impact of the state’s 104 publicly-owned, public use airports.

Jeffrey Cullen-Dean reports that Sonny Perdue, the U.S. Secretary of Agriculture, toured the National Detector Dog Training Center in Newnan on Friday. The U.S. Department of Agriculture uses the site to train dogs and handlers to find threats to American agriculture, such as invasive species and diseases, along the borders, at ports and in cargo.

Andy Miller reports that the 140-plus acres of Rome’s mental hospital have stayed empty and forlorn-looking since the facility closed eight years ago. The shuttering of Northwest Georgia Regional Hospital came as the state was just beginning to execute its settlement agreement with the Justice Department over hospital conditions and the lack of community services.

Here’s why tourism is important to Warner Robins, author says

Wayne Crenshaw reports that if anyone thinks tourism isn’t important to Warner Robins, expert Bill Geist points out that there are nearly 2,000 hotel rooms in the city. Assume, he said, that only half of those rooms are occupied any given night, and all of those occupants are alone.

Greg Bluestein reports that Georgia Democrats promised to launch new challenges against Republican lawmakers who voted for the “heartbeat” anti-abortion bill. And a first wave of those candidates announced those plans just days after the legislative session ended.