Staff reports that Georgians hit hardest by Hurricane Michael can apply for assistance to support their families under a temporary program supported by the Administration for Children and Families and the Georgia Division of Family and Children Services. DFCS will implement a Disaster Temporary Assistance for Needy Families program, or DTANF, in 20 Georgia counties to support families as they continue to recover from the storm. 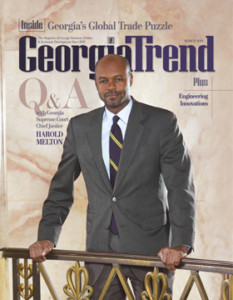 Susan Percy reports that Harold Melton had a singular but rock-solid preparation for his role as Georgia’s top jurist, with 11 years in the state attorney general’s office; a stint as former-Gov. Sonny Perdue’s executive counsel, including work on the team attempting to negotiate a settlement in the tri-state water wars; and 13 years on the high court.

Kelly Yamanouchi reports that Delta Air Lines is being fined $750,000 for flights with long tarmac delays that violated a U.S. Department of Transportation rule. However, of the $750,000, Altanta-based Delta is being credited $450,000 for compensation it gave to passengers stuck on the tarmac and for the airline’s costs to set up a backup data center and an automated aircraft parking guidance and jet bridge positioning system.

Dave Williams reports that the Georgia House of Representatives overwhelmingly approved a $27.5 billion fiscal 2020 state budget Thursday, but not before Democrats accused the Republican majority of missing an opportunity to expand the state’s Medicaid program.

Staff reports that six weeks after pledging to “ensure that every part of our state has access to opportunity” in his first State of the State address, Governor Brian P. Kemp announced a significant capital investment coming to rural southwest Georgia. Silicon Ranch Corporation, the U.S. solar platform for Shell and one of America’s largest independent solar power producers, has committed to invest approximately $150 million in three solar projects in Early County.

Ross Terrell and Stephen Fowler report that a fight over control of Atlanta’s Hartsfield-Jackson Atlanta International Airport is brewing under the Gold Dome. Sen. Burt Jones filed legislation that would create the Georgia Major Airport Authority. In essence, it would lead to a state governing body taking over control of the airport from the city of Atlanta.

Martha Dalton reports that the Georgia Senate approved a bill Wednesday meant to improve school security. The vote came about two weeks after the one-year anniversary of the school shooting at Marjory Stoneman Douglas High School in Parkland, Florida. The legislation centers on three areas of safety: prevention, physical security and response.

Wes Wolfe reports that sometimes the real action happens in subcommittee, or happens away from committee meetings altogether. That’s been the way things have gone during state Rep. Jeff Jones’ efforts to get two coal ash notification bills through the General Assembly. Because of political considerations within the state House of Representatives, Jones took his name off both bills, and while one won’t move again this year, House Bill 93 passed in full committee Thursday with little indication of the storm that came before it.

Wes Wolfe reports that as the state Senate legislation on shellfish aquaculture received lightning-fast consideration in the upper chamber, its companion in the state House wasn’t much slower. State Rep. Jesse Petrea, R-Savannah, took over as lead on the project from state Rep. Jeff Jones, R-St. Simons Island, and introduced House Bill 501 Tuesday. By Thursday, it was up for a hearing and vote before the House Game, Fish and Parks Committee.

Wes Wolfe reports that this legislative session’s attempt at reforming the Shore Protection Act contains within it a paragraph solely devoted to preserving within state law the viability of development on the Sea Island spit. State Rep. Karla Drenner, D-Avondale Estates, raised the issue Thursday during a hearing on House Bill 445 in the House Natural Resources and Environment Committee.

Jill Nolin reports that public transit throughout Georgia — including even in the small, rural pockets of the state — would gain access to a steady source of income under a new measure filed under the Gold Dome. The proposal, sponsored by Rep. Kevin Tanner, a Republican from Dawsonville, would replace a sales tax paid on some transportation services with a 50-cent fee on all rideshare, taxi and limousine trips and a 25-cent fee on shared trips.

Ty Tagami reports that a push for state funds to be used for private school tuition and school expenses has increased odds of passing this year as both chambers of the Georgia General Assembly consider nearly identical bills that have the support of Gov. Brian Kemp’s floor leaders.

The Key to Prosperity

A Drive to Thrive