Staff reports that Governor Kemp’s Floor Leader, Representative Dominic LaRiccia (R – Douglas), introduced legislation Friday, Feb. 22, to allow the state to draw down increased federal funds for use in improved infrastructure and maintenance in Georgia’s rural airports. “As governor, I am committed to ensuring greater opportunity for all Georgians – no matter their zip code,” stated Governor Kemp. 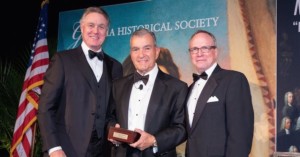 Mary Ann DeMuth reports that each year, the Savannah-based Georgia Historical Society (GHS) and the Governor’s Office appoint two Georgia Trustees, who represent leadership, character and commitment to the common good. It’s our state’s highest honor and it recognizes individuals whose achievements and service mirror the ideals of the original Trustees appointed by King George II in 1732 to establish the colony that became Georgia.

J. Scott Trubey reports that Phil Mays stands at the center of a sprawling construction site and points to a future food hall, a brew pub and rows of boutiques taking shape behind a curtain of trees along Ga. 400 in south Forsyth County. Hundreds of high-end apartments — some geared specifically to seniors — will rise over a central common and will be flanked by a luxury CMX movie theater.

Staff reports that PCOM South Georgia offices temporarily located at Hospital Park in Moultrie, Georgia, are abuzz with activity. Philadelphia College of Osteopathic Medicine (PCOM) leased this space to house a number of full-time employees prior to the summer opening of the new Tallokas Road location.

Delta Vies for More Flights to Tokyo’s Haneda Airport, Including From Atlanta

Trevor Williams reports that Delta Air Lines Inc. is once again vying for new service into Tokyo’s Haneda Airport from key U.S. hubs including Atlanta, arguing that the more centrally located hub will be beneficial for business travelers and spur more U.S.-Japan trade and tourism.

Curt Yeomans reports that although images of the plans for the Revel mixed-used development at the Infinite Energy Center have been gradually emerging over the months, the future of what the center itself will look like is starting to come into focus. A 50,000-square-foot expansion of convention center space.

Marie Nesmith reports that history buffs are just clicks away from gaining access into some of Georgia’s most notable landmarks. Unveiling the new resource to patrons at the beginning of 2019, Georgia State Parks & Historic Sites now is selling its Historic Site Annual Passes online.

Mary Landers reports that Savannah’s bicyclists are getting an upgrade to the northbound bike route into downtown this month as contractors demarcate the Lincoln Street bike lane in bright green. City Council approved the $221,235 project in November, awarding the contract to Florida-based Angco Striping, which started the application last month.

Martha Dalton reports that national data shows dyslexia affects between 10 and 20 percent of the U.S. population. A federal law, called the Individuals with Disabilities in Education Act (IDEA), says dyslexic students are entitled to special education services. However, the law doesn’t specify what those services should be.

Wes Wolfe reports that a package of modernizations and changes to state hunting laws passed the state Senate on Thursday but not without some tense moments and an objection by the Senate Democratic leader to a bit of parliamentary maneuvering by the Republican majority.

Staff reports that as head of Georgia’s judiciary, Georgia Supreme Court Chief Justice Harold D. Melton announced he has established an “Ad Hoc Committee to Prevent Sexual Harassment in the Judicial Branch of Government.” The committee is charged with gathering research, examining and evaluating best practices, and encouraging all classes of Georgia courts and court councils to establish policies to prevent sexual harassment.

Amanda C. Coyne reports that just weeks after being named Gwinnett County’s first female Democratic Party chair, Bianca Keaton stood on stage in a Lawrenceville gym and introduced presidential candidate and U.S. Sen. Elizabeth Warren to a crowd of 1,100. But even in the national spotlight, Keaton is ready to defend Democrats’ recent gains in the county by keeping her focus local.