Staff reports that voting in Georgia brought long lines and delays for many in metro Atlanta. The Georgia primary was moved to June because of the coronavirus pandemic. Millions of Georgia voters requested absentee ballots, many for the first time. 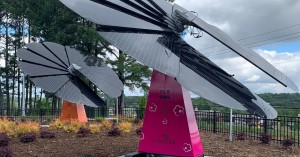 Kelly Yamanouchi reports that Hartsfield-Jackson International has halted the bidding process for new contracts for airport restaurants, citing the upheaval caused by the coronavirus pandemic. Contracting for airport concessions had already been delayed for years amid a federal investigation into Atlanta City Hall corruption.

Staff reports that eighteen companies with headquarters located in Georgia earned a place on Fortune magazine’s 2020 list ranking enterprises with the 500 highest fiscal-year revenues in the nation. Home Depot finished 26th on Fortune’s extended ranking, making the company the state’s highest revenue-generating company, according to the Fortune data released earlier this month.

Curt Yeomans reports that Gwinnett County businesses can apply for funding to help them recover from COVID-19 novel coronavirus pandemic, county officials said. The county has $20 million in federal CARES Act loans and grants that it can distribute to businesses.

‘I Refuse Not to Be Heard’: Georgia in Uproar Over Voting Meltdown

Richard Fausset, Reid J. Epstein and Rick Rojas report that Georgia’s statewide primary elections on Tuesday were overwhelmed by a full-scale meltdown of new voting systems put in place after widespread claims of voter suppression during the state’s 2018 governor’s election. Scores of new state-ordered voting machines were reported to be missing or malfunctioning, and hourslong lines materialized at polling places across Georgia.

Jill Nolin, Ross Williams, Stanley Dunlap and John McCosh report, at the Fulton County precinct in the former Fanplex complex on Hank Aaron Drive downtown, perspiration beaded on Carlen Funk’s face around her mask as she handed out water and snacks to the hundreds of people lined up to vote inside the long-shuttered arcade. It was 4:15 p.m. and she’d already been to two other precincts.

Terry Dickson reports, when the Georgia General Assembly reconvenes Friday after a long break for the coronavirus, the state Senate will take up a House bill that could place state heritage lands and structures in private hands. The Georgia House overwhelmingly approved House Bill 906, which proponents say could put state assets under the control of people who could better care for them while wary opponents assert it could endanger some critically important, environmentally sensitive and historic sites.

Dave Williams reports, that Georgia’s U.S. Senate primary went into the wee hours Wednesday with the result far from uncertain. With results trickling in very slowly in an election held with new voting machines and during the midst of a global pandemic, investigative journalist Jon Ossoff was on the edge of being forced into an August runoff for the right to challenge incumbent Republican Sen. David Perdue.

Opinion: Tuesday was a lawyered-up sequel to the 2018 race for governor

Jim Galloway writes, according to Ryan Anderson, who operates the data tabulation website GeorgiaVotes.com, 62% of voters who cast in-person and absentee ballots as of last Friday didn’t participate in 2016 primaries. New voters are often angry voters. They make incumbents nervous.