Stephen Fowler reports that Gov. Brian Kemp has signed a new executive order that extends health and safety precautions for reopened businesses through the end of May while state officials seek to ramp up contact tracing for those who may have been exposed to the coronavirus. 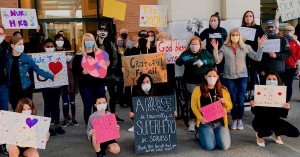 Mary Ann DeMuth reports, if there’s one positive thing the COVID-19 pandemic has generated, it’s increased appreciation for our nurses and frontline healthcare workers. Across Georgia, celebrations have occurred in response to National Nurses Week, May 6-12, and more are planned throughout May for National Nurses Month 2020.

Andy Peters reports that a prominent site in Midtown, where a historic funeral home once operated, may eventually be the setting for a three-tower complex of apartments, offices and a hotel. The project devised by Portman Holdings would combine the 1928 landmark H.M. Patterson & Son’s Spring Hill Chapel with a 36-story tower and two slightly smaller towers.

Metro Atlanta housing sales plunge almost 26% in April due to coronavirus, but prices went up

Dyana Bagby reports that the single-family residential housing market in metro Atlanta continued to take a beating in April due to the coronavirus pandemic, with total home sales plummeting nearly 26% compared to last year’s numbers, according to a recent market report. Average and median prices of home sales, however, increased.

Katie Nussbaum reports, as millions have shifted to working remotely and some major companies decide to make the transition to a permanent one for their employees because of the coronavirus pandemic, the Savannah Economic Development Authority is hoping that a tweak to its Creative Technology Incentive will help bring some of those workers to the Hostess City.

Doug Walker reports that Rome-Floyd County Development Authority approved the issue of $240 million worth of industrial revenue bonds Tuesday for a Ball Packaging LLC expansion that is already well underway. Ball is expanding its location in the Shannon area to manufacture recyclable aluminum cups.

Gordon Jackson reports that officials are still waiting to learn whether a rocket will ever be launched into orbit at a proposed spaceport in Camden County. But companies are still expressing interest in Spaceport Camden despite the uncertainty about whether the Federal Aviation Administration will grant a license to launch from the site.

Beau Evans reports that Atlanta and Albany nabbed a combined nearly $2 million in federal environmental grants meant to clean up contaminated areas, the U.S. Environmental Protection Agency announced Tuesday. A chunk of that federal funding will help spruce up sections of the Atlanta Beltline trail currently under construction near old railways to the south along the I-75/85 interstate corridor, Atlanta officials said in a news conference.

Emma Hurt reports that some Georgia lawmakers are calling for a stalled hate crimes bill to be passed and renamed for Ahmaud Arbery, the young man who was killed while jogging in suburban Brunswick in February. That bill has been stuck in a Senate committee since it passed the Georgia House more than a year ago.

Greg Bluestein reports that an internal poll conducted by a group backing Gov. Brian Kemp showed a deadlocked presidential race in Georgia and tight contests for both U.S. Senate seats, underscoring the challenges Republicans face keeping the state in the GOP column. The poll pegged Joe Biden at 47% of support and President Donald Trump with 46%, within the margin of error of 4 percentage points.