Debbie Elliot and Greg Allen report that for three decades, Georgia and Florida have been battling over how to share a precious resource: water. The dispute is once again headed to the U.S. Supreme Court, where Florida wants the justices to cap Georgia’s water use. But a court-appointed special master recently rejected that idea. 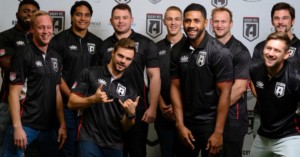 Get ready for rugby, Atlanta

Mary Ann DeMuth reports that this year, Major League Rugby comes to Atlanta, taking its rightful place among the city’s established professional soccer, football, baseball and basketball teams. In the inaugural season, which begins Feb. 9 at Life University’s Lupo Field in Marietta, Rugby ATL features a 36-man roster of experienced domestic and international players who promise to bring excitement to the sport.

Kelly Yamanouchi reports that Delta Air Lines CEO Ed Bastian wants to transform the air travel experience by the year 2025. He envisions that when you request a ride to the airport, Delta’s app could recommend how early you need to leave based on highway traffic, and which airport security checkpoint has the shortest lines.

David Allison reports that a new 1,135-unit residential unit and farm is being proposed in Henry County south of Atlanta. To be called Garden Lakes, the development would include a single-family and townhome community centered around a lake with a 25-acre farm-to-table agricultural farm, according to a Jan. 6 filing with the state of Georgia as a development of regional impact.

Dave Williams reports that poor administration of Georgia’s film tax credit, the state’s largest and arguably most generous, is wasting millions of tax dollars, a new state audit has found. In a 75-page report, the Georgia Department of Audits and Accounts accused the state departments of Revenue and Economic Development of lacking the controls necessary to prevent improper granting of credits to film production companies.

Wes Wolfe reports that, describing what they call a corporate takeover of health care, members of the state House Special Committee on Access to Quality Health Care proposed legislation that they say will bring more transparency and fairness to a health care process that could only be called Kafkaesque, that would appear to exist in such a way as to make health care for people who need it as expensive and inconvenient as possible, without much actual concern for their well-being.

Sarah Fay Campbell reports that ethylene oxide, coal ash and the Golden Ray – as well as health care legislation, rural broadband, and gambling – are among the issues Rep. Lynn Smith expects to deal with this legislative session. Smith, R-Newnan, is chairwoman of the House Natural Resources and Environment Committee, and her committee hears most bills dealing with environmental issues.

Staff reports that Secretary of State Brad Raffensperger announced Monday that he is instructing elections officials for the state and individual counties to be on heightened diligence against possible cybersecurity attacks following a warning issued by the U.S. Department of Homeland Security.

Nyamekye Daniel reports that Georgia is one of the worst states to raise a family, according to a report released on Tuesday. The state ranks 42nd out of the 50 states in the analysis conducted by financial website WalletHub.

Jill Nolin reports that a push to ensure low-income new mothers have a year of health care coverage through Medicaid – as opposed to cutting off access for many of them two months after they give birth – is among the raft of proposed legislative fixes coming out of the study committees that met this fall. The proposal from a panel focused on the state’s high rate of maternal deaths, which routinely places Georgia among the worst in the nation.

Greg Bluestein reports that the voting rights group founded by Stacey Abrams will hold what it calls an unprecedented voting rights summit in Atlanta on Friday that will bring together attorneys, election administration experts, activists and lawmakers.