Rosie Manins reports that U.S. Sen. Johnny Isakson, R-Georgia, will deliver his farewell address on the Senate floor Tuesday afternoon, which viewers throughout Cobb County can see live on the internet. Isakson, 74, who lives in east Cobb, is retiring at the end of this year, three years before his term ends, due to ongoing health problems. 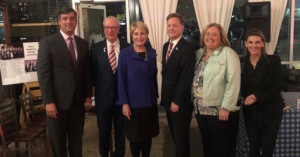 Mary Ann DeMuth reports that our state has a reading problem. Only 42% of Georgia public school children are reading proficiently by the end of third grade, according to 2019 Georgia Department of Education (DOE) figures.

Michael E. Kanell reports that Metro Atlanta’s healthy economic growth since the Great Recession has been an uneven blessing. It brought new high-tech companies and thousands of good-paying jobs, but also thousands more with modest paychecks that leave nearly half the region’s workers struggling.

Eric Mandel reports that with the fried chicken wars in full swing, Atlanta-based Church’s Chicken is hoping that Texas sells. Church’s, Atlanta’s fourth-largest franchise, said Monday it will test a global brand relaunch in Canada that stresses the restaurant’s link to The Lone Star State, rebranding as Church’s Texas Chicken.

Trevor Williams reports that as soon as it officially opened its new plant, Irving Consumer Products Inc. had already sold out its production capacity. The Canadian company over the last two years has hired 200 people at a $470 million Macon plant that attracted the likes of U.S. Commerce Secretary Wilbur Ross to a 2017 announcement showcasing its factory design.

Hansi Lo Wang reports that for the first time, the U.S. census will play out primarily online and only about 26% of households — mostly in areas with low Internet subscription rates — are set to receive paper questionnaires either in the mail or hand-delivered to their addresses by mid-March, when all households can take part in the count. Despite the Census Bureau’s plans, some advocates still worry rural areas could be left behind. In Georgia — the state with the fourth largest black population in the country — an Atlanta-based nonprofit organization called Fair Count has been dispatching Wi-Fi routers and portable hot spots to rural churches and community centers.

Georgia Awarded an “A” for Anti-Human Trafficking Efforts

Staff reports, recently, Shared Hope International awarded Georgia an “A” on the strength of its laws to combat sex trafficking – an improvement from the “B” received in 2018 and the “C” from the first report card in 2011. “This ranking is a direct result of the hard work of our First Lady, the GRACE Commission, Attorney General Chris Carr, the General Assembly, law enforcement, and non-profit organizations,” said Governor Brian Kemp.

Sam Whitehead reports that time is running out for Georgians to weigh in on Gov. Brian Kemp’s plans to change the state’s health care landscape. The public comment period runs through Tuesday for the governor’s plans for a limited Medicaid expansion, to tweak the state’s individual insurance marketplace, and to cut Georgia’s ties with Healthcare.gov.

Jimmy Carter back in hospital to treat urinary tract infection

Michael Brice-Saddler reports that former president Jimmy Carter was hospitalized over the weekend to treat a urinary tract infection, though the Carter Center says “he is feeling better and looks forward to returning home soon.”

David Pendered reports that in Georgia alone, an estimated $34-plus billion in property has no owner with a clear title. If the value were unlocked, this heirs property – most of it presumed to be in black hands – could help address the black-white divide in homeownership and issues related to poverty, according to an emerging body of research by the Federal Reserve Bank of Atlanta and others.

Growing homelessness in state tied to lack of affordable housing

Jill Nolin reports that the number of people experiencing homelessness across Georgia has increased slightly since the last time a head count was attempted, with advocates and service providers in one north Georgia community blaming a shrinking supply of affordable housing. A statewide report that is focused on the state’s rural and suburban counties showed a 13% increase in the homeless population from two years ago, according to a report from the state Department of Community Affairs released last month.

Gov. Kemp of Georgia Is Expected to Tap Kelly Loeffler for Senate Seat

Richard Fausset reports that a politically untested businesswoman is expected to be appointed this week to a soon-to-be-vacated United States Senate seat in Georgia, a move that would pit the state’s governor against President Trump, who had lobbied for a different candidate.

Greg Bluestein reports that when Gov. Brian Kemp announces on Wednesday that he’s picked Kelly Loeffler for an open U.S. Senate seat, she’ll have some powerful backup to help defend her new post. The National Republican Senatorial Committee will support Loeffler, giving her a key political ally as she faces a potential GOP challenge, according to two people with direct knowledge of the decision.