Ross Williams reports that State Rep. Mary Frances Williams, D-Marietta, says it’s time for Georgia Power to clean up its act in south Cobb. Williams introduced a resolution in the House this week urging the power company to remove 6.3 million tons of coal ash, a by-product of burning coal in power plants, from Plant McDonough-Atkinson in south Cobb. 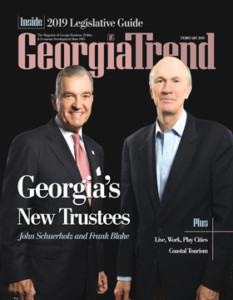 Candice Dyer reports that the Telfair Museums of Savannah just completed an award-winning, $1.25-million reinterpretation project called Slavery and Freedom in Savannah, which has transformed the Owens-Thomas House and Slave Quarters with new exhibits and narratives to correspond with the 200th anniversary of the buildings.

J. Scott Trubey reports that Phil Mays stands at the center of a sprawling construction site and points to a future food hall, a brew pub and rows of boutiques taking shape behind a curtain of trees along Ga. 400 in south Forsyth County. Hundreds of high-end apartments — some geared specifically to seniors — will rise over a central common and will be flanked by a luxury CMX movie theater.

Georgia leaders rally around Ralston amid threat of revolt

Greg Bluestein reports that the silence at the statehouse over House Speaker David Ralston’s future is over. And the Republican has the threat of a revolt among rank-and-file members to thank for it. As news of state Rep. David Clark’s resolution calling on Ralston to resign his position ricocheted around the Capitol, a string of prominent figures who had previously stayed out of the fray rallied behind the embattled House leader.