Atlanta’s High Museum of Art swelled with visitors recently and eager to glimpse the Vermeer’s “Girl With The Pearl Earring” as well as the final weekend of “Drawing Inside The Perimeter,” a knockout showcase of Georgia artists including Kojo Griffin, Alex “Hense” Brewer and the late great Charles Nelson. Several artists included in the exhibit, including Jiha Moon and 2013 Georgia Trend Most Influential Georgian Alejandro Aguilera, also participated in a Monster Drawing Rally to raise money for the ITP collection. More than 70 artists worked side by side to produce instantaneous works in three one hour shifts for sale for $75. The pace was heroic and the quality was astonishing, prompting mad rushes for purchases to the soulful background beats of DJ Agent 45. 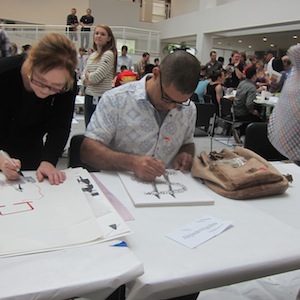 Pictured top: Graffiti wall in the Inside the Perimeter exhibit by Alex “Hense” Brewer.